Aruba is a southern Caribbean island located just about 15 miles off the coast of Venezuela. Aruba’s most valuable natural resources are sugar white sand beaches, nice climate and it’s friendly population. This, amongst others, makes Aruba the most popular small island Caribbean destination for stay over tourists. Aruba prides itself for the highest number of return visitors in the Caribbean.

Aruba enjoys one of the highest gross domestic product per capita and, therefore, one of the highest standard of living in the Caribbean. Aruba possesses relatively good quality infrastructure, including a state of the art international airport, three ports and a tram (street car) service in the main streets of its capital Oranjestad.

As a self-governing country within the Kingdom, Aruba is in principle responsible for its own internal affairs. The head of state is King Willem Alexander of the Netherlands, who is represented by the Governor of Aruba, appointed to serve six-year terms. Legislation is enacted by a 21 member Staten (in Papiamento: Parlamento) together with the Government. Members of the Staten are elected by direct popular vote to serve four-year terms. The Government is formed by a seven to nine member cabinet, which is typically backed by a majority in the Staten.

Aruba is a civil law country, meaning that its laws are written (codified) into a referable system, which forms the primary source of law. The main source of private law is the Civil Code of Aruba, which comprehensively deals with matters related to business, contracts and liability.

Tourism is the major contributor to Aruba’s economy, accounting for about 80% of the island’s economy. The services and financial sector are also important contributors to the economy. The latter includes the (offshore) registration and finance of aircraft in Aruba. While the oil refinery in the Aruba town of San Nicolas has been put on idle, the facilities are still being used as a major oil transshipment center. The Freezone is also a major business in Aruba

The Government of Aruba recently made a move to sustainable energy, with the ambitious goal to achieve 100% sustainability by the year 2020. With that the Government is also developing a green and knowledge based economy. 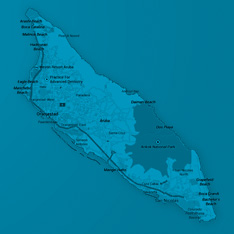